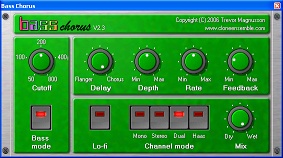 Have you ever used a stereo chorus on a bass sound and ended up with a muddy bottom end swimming all over the place?

Bass Chorus can avoid that problem by separating the bass and treble frequencies, where you set the cutoff frequency. The effect is only applied to the treble portion, which is then mixed back with the bass for output.

NB: This is a 32-bit plugin. If you are using a 64-bit host app, you will need a bitbridge. I recommand jBridge.

(Cubase users: use this Mono->Stereo version if you want it to appear in the send effects list for mono tracks.)

Need help installing? Check out Installation Notes.
Will it run under your audio host? Check out Compatibility Notes.